Here, Eat This: A Beginner's Guide to Ethiopian Cuisine

African food is similarly diverse and distinct, especially in Ethiopia -- a country with incredibly fertile land and a rich history. Indeed, this corner of the world is the site of the earliest human habitation. The country has been marred by war and famine in its more recent history, however, which tends to overshadow its immense contributions.

Houston's newer Ethiopian restaurant, Lucy, is looking to change this perception by offering inexpensive, accessible food in a modern, attractive setting. Even its name calls attention to the positive aspects of Ethiopia, which is where the 3.2 million year-old skeletal remains of Lucy -- an Australopithecus afarensis and one of our earliest ancestors -- was found.

The rest of the world is slowly discovering Ethiopian food too, thanks in no small part to people like Marcus Samuelsson, the Ethiopian-born, Swedish-raised chef who owns the renowned Red Rooster in Harlem and to the large Ethiopian diaspora in cities such as Washington D.C., where the cuisine is as popular as Indian food is in Houston.

You'll notice that there's no pork or shellfish of any kind served in Ethiopian restaurants. This is due to the major religions that have influenced the country over thousands of years: Judaism, Islam and Orthodox Christianity. Yes -- Christianity. The Kingdom of Aksum, now known as Ethiopia and Eritrea, was one of the first Christian countries in the world, having officially adopted Christianity in the 4th century. Today, nearly 50 percent of Ethiopians identify as Orthodox Christians, while 34 percent are Muslim and 19 percent are Protestant.

This also means that you will find stimulants in Ethiopian restaurants, in particular coffee and alcohol. And if you look around, you'll probably also find at least one icon of Saint George slaying a dragon. Ethiopia shares this patron saint with Greece, and it's just one reminder that the country has shared such a fascinating history with Western culture over the years.

This is perhaps the most important foodstuff in Ethiopian cuisine, as it serves not only as a source of protein and vitamins but also as your serving utensils and, often, your plate. Injera is a flatbread made from teff, a grass (not a grain, like wheat) that's fermented with water for several days before being baked into large, floppy pancakes that have the texture of crepes and the taste of sourdough bread. Teff flour is incredibly high in fiber, iron and calcium. It has all the amino acids required to be a complete protein, but it's also gluten-free. It's kind of a miracle food. To eat Ethiopian food, simply tear off a piece of injera, grab some food with it, roll it up, pop the whole thing into your mouth and repeat until finished. Most restaurants will bring you silverware if you ask for it, but eating food this way is traditional and shows camaraderie among your dining companions -- especially as everyone usually eats from the same plate and most Ethiopians feed each other as they dine, not just themselves. 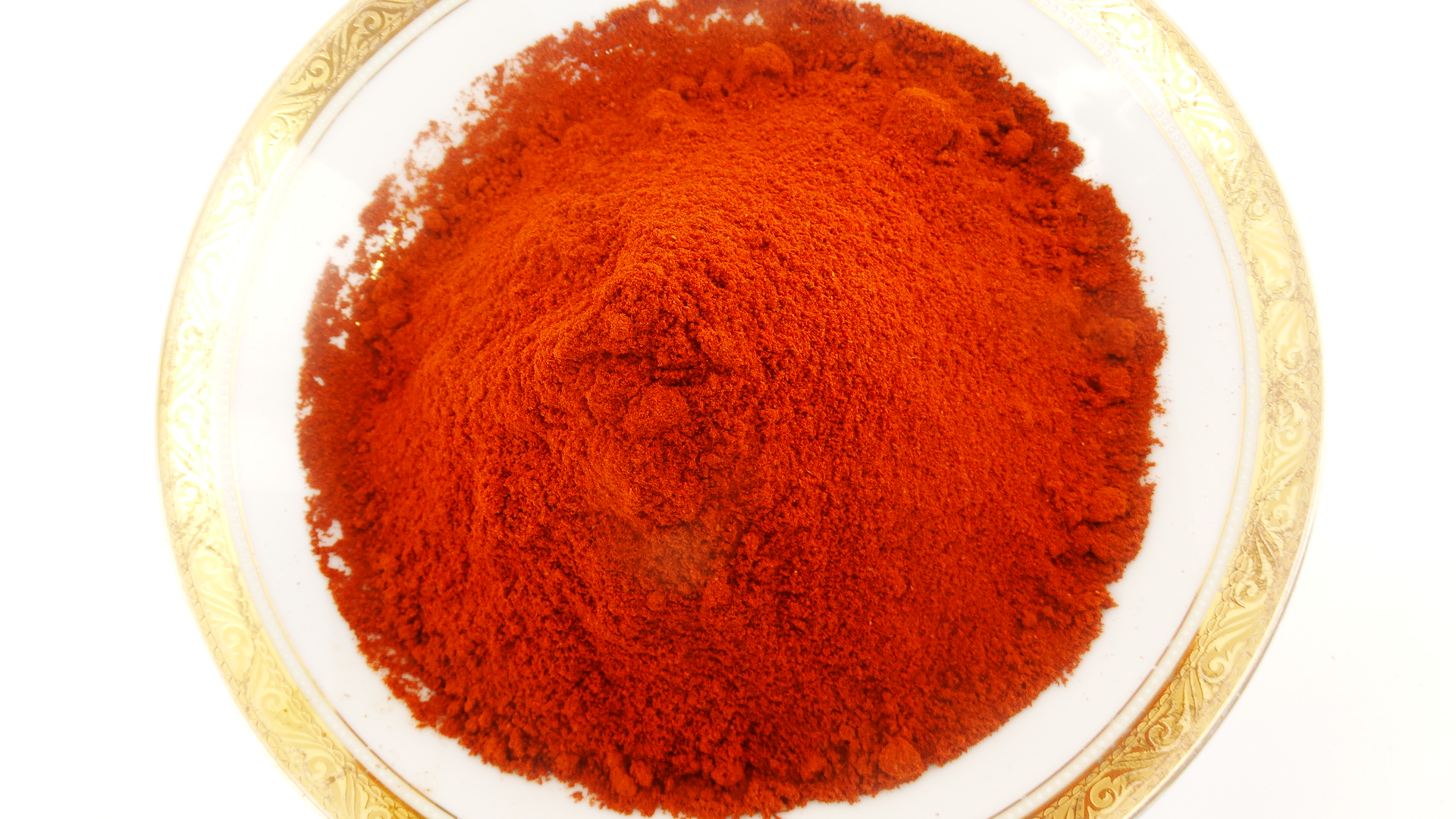 This is the chief spice blend found in Ethiopian cooking, a fragrant blend that's somewhere between Indian curry and Southwestern chili powder. It's a dark red blend of sun-dried chiles, ginger, garlic, cardamom, nutmeg, cloves, cumin, coriander and other spices. In his memoir, Yes, Chef, Marcus Samuelsson described berbere as "both masculine and feminine, shouting for attention and whispering at me to come closer. In one sniff it was bright and crisp; in the next, earthy and slow."

Simply put, a wat (or wot) is a stew. It begins its life as red onions cooked down with berbere and/or niter kibbeh, a clarified butter infused with ginger, garlic and other spices -- also an essential Ethiopian ingredient. From there, the wat can become anything from a vegetable dish to a meat stew. Lentils, carrot, potatoes and cabbage -- all highly common ingredients -- are staples of the Ethiopian diet, and it's common to find them stewed separately or together and served on a large vegetarian platter. 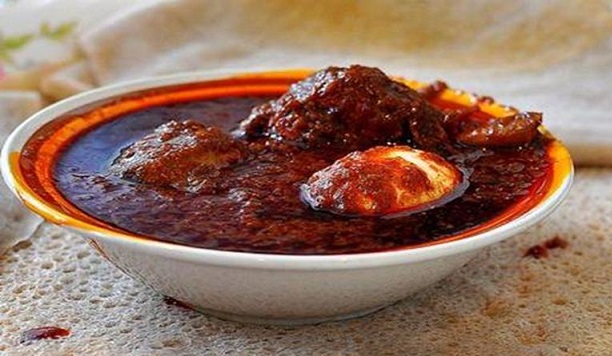 Doro wat is my favorite type of wat, a chicken-based stew that's colored an intense shade of red from the berbere spice and stuffed full of dark meat chicken and a whole boiled egg. Imagine a thick, spicy chicken chili and you have doro wat. Along with a simple vegetarian platter, this is the dish I use to lure people into becoming Ethiopian cuisine converts. 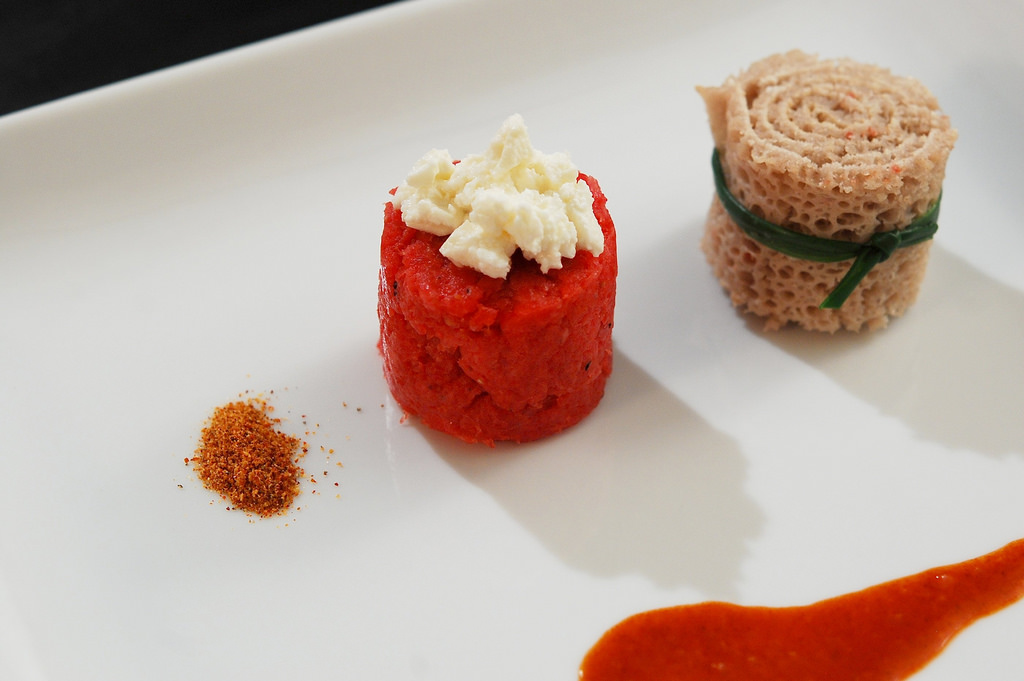 If you're a connoisseur of steak tartare, you need to meet the spicy Ethiopian version: kitfo. Like traditional tartare, kitfo is made with minced raw beef, although there's no raw egg mixed in. The minced beef is tossed with mitmita (a hotter version of berbere) and niter kibbeh, after which you gobble it up with sheets of injera. Gored gored is the same preparation, but the beef is diced into small cubes instead of minced. 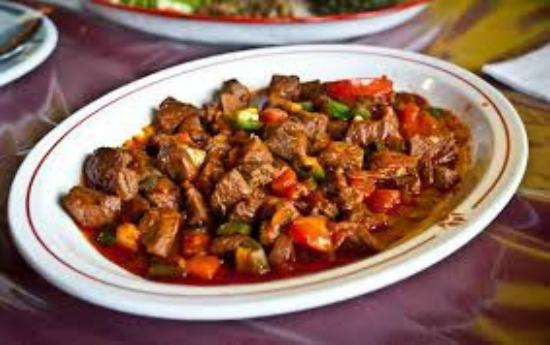 It seems as if nearly every culture has their own version of "fajitas," or marinated beef sauteed with vegetables. Tibs can be made with beef, but you'll also find it made with lamb too. Although the meat-heavy dish is traditionally served on holidays and special occasions, you can find it on every Ethiopian menu in Houston. 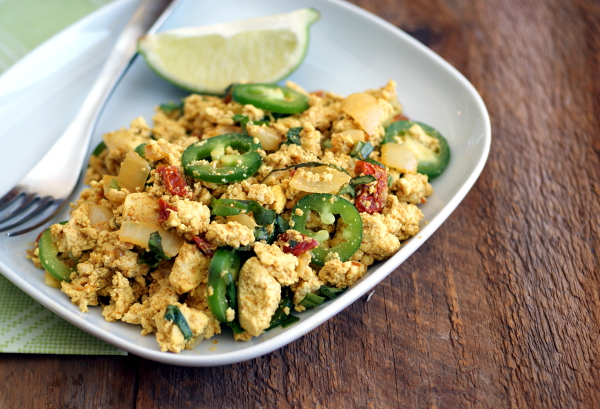 Fit-fit (or fir-fir) is simply scrambled eggs with tomatoes and onions. Foul -- which has its roots in Middle Eastern trade routes and shares its name with a similar Levantine dish -- is a dish that calls to mind refried beans, served with tomatoes, onions, jalapeños and scrambled eggs. Both are typical Ethiopian breakfast foods, and both would probably be equally at home on your own breakfast table. 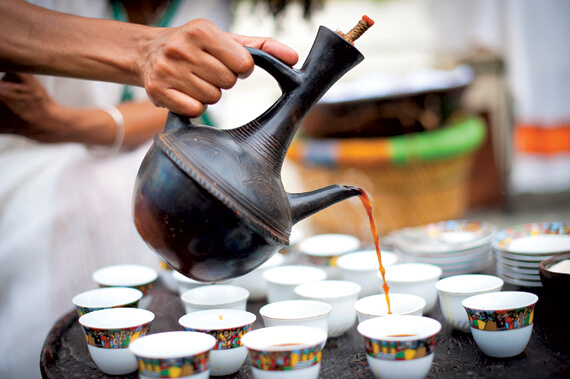 Coffee junkies can thank Ethiopia for introducing the caffeinated bean to the rest of the world. It still plays a central role in Ethiopian society today, with coffee ceremonies that include three rounds of the beverage, finger-food snacks such as popcorn and the burning of incense as you commune with friends over coffee that has been roasted, ground and prepared on the spot. You can enjoy your own coffee ceremony with all the traditional aaccoutermentsat Blue Nile, the city's oldest Ethiopian restaurant. 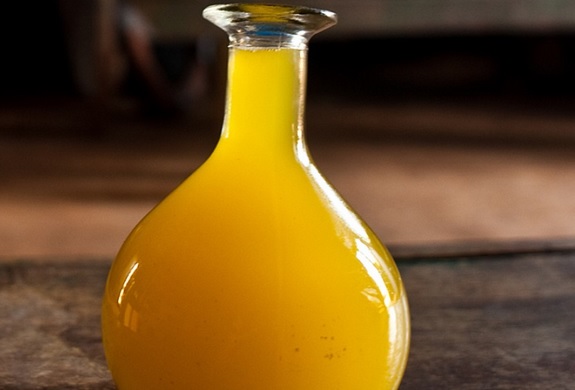 While a coffee ceremony is the traditional way to close out a meal, I prefer tej. The honey wine has the thick sweetness of mead but with an orange blossom lightness to it that's intoxicating. It's served in unusual glass jugs that don't look as though you should drink from them, but that's the idea. Bottoms up!